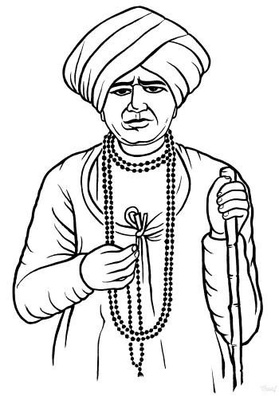 Who is Sant Jalaram?

Jalaram Bapa commonly known as Bapa was a Hindu saint from Gujarat, India. He was born on November 4th, 1799. At the age of sixteen, Jalaram married Virbai, the daughter of Pragjibhai Thakkar. Jalaram was inclined to completely withdraw from materialistic life and become an ascetic, Virbai proved to be an asset to him in his works of feeding those in need. She is popularly known for supporting Bapa wholeheartedly in his saintly duties.

When he was eighteen, Bapa started his Sadavrat (‘an oath forever’), providing free food to every person, at first to sadhus (monks) but later extended to anyone who dropped in.

Most of all Jalaram Bapa is remembered for his selfless acts of charity, nearly 200 years later this tradition of feeding people still continues to this day in Virpur and around the world.